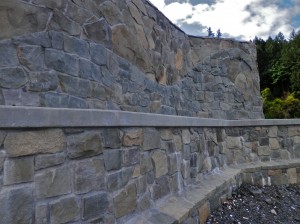 complete.  This project is a sea wall designed to entomb an archaeological site discovered during the environmental assessment for a smaller sea wall project.  This bay and beach was once a seasonal First Nations village site I am told.  In this area, it is common practice to leave the site covered so as not to disturb the site instead of excavating it.  A cement wall was engineered and poured to hold back the massive amount of earth along the sea shore.  The section that I did the design and stone facing on was 15 feet tall and 120 feet long, with a walkway all along it at about 6 feet off the ground.  You might have noticed another seawall I did many years ago with a wave in it also on Pender Island. 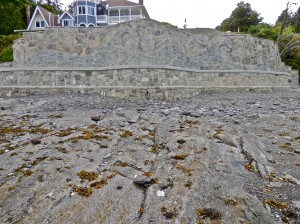 Well this is for the same client at a new location further around the same bay.  The client liked the wave motive on the older wall and asked me to do a design with waves on the new wall.  The design features four waves moving across the stone with watery undulations between them.  The waves are made of 6″ deep blue sandstone pieces, and the sky area above the waves is a thinner rust/tan coloured flagstone.  This creates a nice reveal where they meet casting a shadow on sunny days, which really highlights the image of the waves that is lost on grey days where the stone all turns grey to the eye.  The lower section of the wall below the walkway is peppered with many different colours of local sandstone.  A big project, that I see more like public art as anyone can access the beach from a Park right next door.  I would like to thank Greg Lucas of Rockheads on Pender Island who worked with me on this project and helped make it all happen.  Also our young helper JD for all his hard work moving stone, mixing cement and keeping us cleaned up!  I will have better pictures in the near future as the wall is almost complete with custom posts (similar to those I did for the previous wave wall project) and stainless steel wire rails along the walkway.