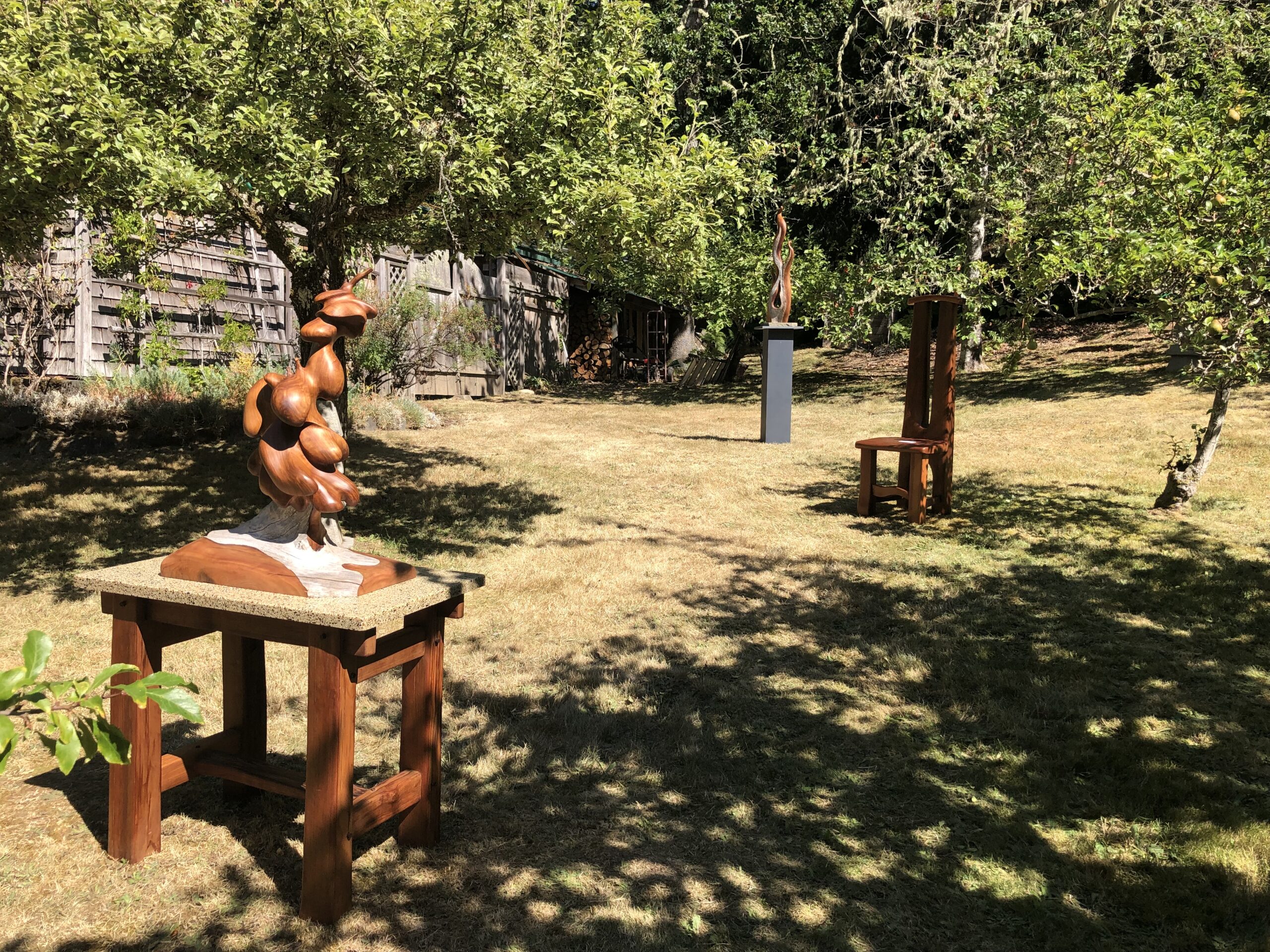 This past August 27/28, I did an outdoor artshow with Stan Oglov (salvaged metal sculptures with magnets) who was also one of the members of the group show from 2021.   We presented the show, titled ‘Art in the Wash’ (as we both live in Port Washington on Pender Island) in Stans orchard and it was amazing!  The weather was fantastic and lots of people attended.  I was super happy as I sold all of the new sculputres I made for the show.

I made 3 new pieces, which was all I had time for while being over loaded with commissioned work all year.  The first piece is called ‘Loophole’ and is a free standing sculpture made from salvaged red cedar driftwood mounted on a round 3/4″ thick metal base (which Stan donated from his vast collection of salvaged metal bits).   When I found the piece on the beach, the wood already had this crossover pattern which flattened out into a wider and narrower part at the top.  I decided to carve a hole into the top making it look somewhat like a pink ribbon you might pin on your jacket.  It stands about 4′ tall and seems to really draw people in as you see it first from a distance and want to follow the flow.

The second sculpture I called ‘Spiral’, again made entirely from one piece of red cedar driftwood.  The wood  had a natural spiraling affect to it that I used as the basis for my design, twisting and turning as it narrows into points at the top.  It is about 20″tall, and 6″ diameter at the bottom.

The final piece I made was another in my tree sculpture series called ‘The Sentinel’.  It is made entirely from red cedar driftwood.  The base and tree are two different pieces of wood attached with glue and dowel posts.  I was going for the wild wind swept feeling as the original piece of wood I used for the tree top had a natural curve as it went from a wide base to the narrow top.   On the base, I left much of the grey natural weather worn cedar (which is how I found it on the beach) because I love the contrast it makes to the smooth sanded and oiled finish on the rest of the tree.  I really appreciated the colours and wood grain in this piece, some parts of the tree seem almost spalted like maple or other woods which you don’t see often in cedar.

All three sculptures are finished with a few coats of Osmo PolyX oil.  Thank you to everyone that came out to the show, and especially to those who purchased the three sculptures,  I appreciate your support!