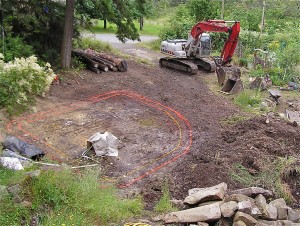 This summer, we have been focusing much of our attention on building a new wood working shop for Colin on our property.  His designs for a load bearing cob shop were approved by our engineer and permitted to build in early June.  Two weeks later, we had an excavator dig out 2 foot wide trenches that hold 18 inch deep concrete footing walls with drain rock along the outside.  Colin built forms down the middle of the trench, using the clay walls as the forms on the inside of the trench and leaving the outer side empty for filling with drain rock. 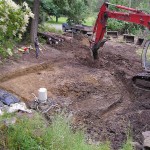 We dug a connecting trench and placed a drain pipe that went down hill towards the garden.  Colin added a small grid of rebar in the bottom of the trench and then called in the cement truck to pour the footings.  He added stakes of rebar throughout the wall to tie together after the stonework was done, as was requested by our engineer for seismic strengthening of the stone and concrete.  He also dug footings for the skylight posts and placed saddles after the concrete pour.  The concrete footing wall is level with the height of the clay grade, and provides a strong ledge onto which the excavator has placed many of the massive stones that we have on the property that will be the base for the cob walls. 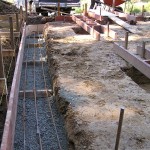 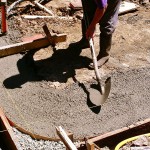 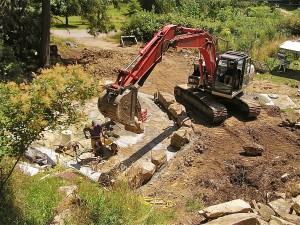 So by mid July, we had the excavator back and picking huge stones from our pile that Colin directed into the spaces between the rebar stakes, trying to place them in such a way so that he could later fill in between them manually with smaller stones.  He mixed and shoveled concrete as each stone was set, and adjusted the placement so that the outside edge was either flat or sloping downwards for water run off. 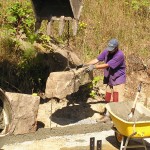 In the pile, he found two huge flat stones that were placed at the front double door entrance to the shop.  Then he spent the next few days picking smaller rocks and cementing them in the spaces, creating a two foot wide, irregularly stacked stone ledge two feet high onto which the cob wall will be stacked, keying in to the varying height of the stones for extra solidity between the cob and the stone wall. 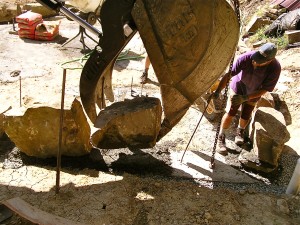 A large pile of clay left from the digging of the trenches will be used as part of the clay we need for mixing the cob, along with a large pile of local pit run sand and bales of straw from the Saanich Peninsula. 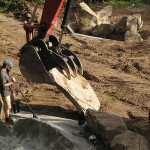 Colin has been planning the design of his shop for a few years, and looking forwards to creating for himself a comfortable and functional space that is built from natural and recycled materials. 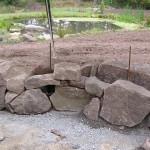 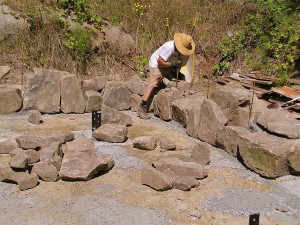 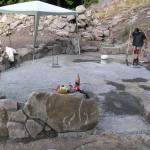